The Colca Canyon and the Andean condor

Some experts say that Colca Canyon is thought to be twice as deep as the Grand Canyon in the USA. Unlike the Grand Canyon, however, Colca canyon is habitable, with a number of Andean communities, with their patchwork agricultural fields and ancient traditions still intact.These ancient, traditional villages are one of the main reasons why so many travellers visit the Colca canyon every year, as well as spectacular views, incredible hiking and probably the main attraction in the area, the Andean condors. The condor population in South America is in demise, but here in Colca Canyon, travellers can see them at fairly close range as they soar on the rising thermals and scan for carrion far below them.

Woman in traditional dress with her llama in Colca Canyon

The river and valley of Colca canyon was a favourite spot of the ancient Inca civilisation Incas, as well as their conquerors, the Spanish who developed outposts along the valley, as they developed a route to Cuzco and other strategic Andean locations. The Spanish constructed churches along the route, the most famous in the region at Coporaque, but for some reason, the towns never grew and the route faded into insignificance. 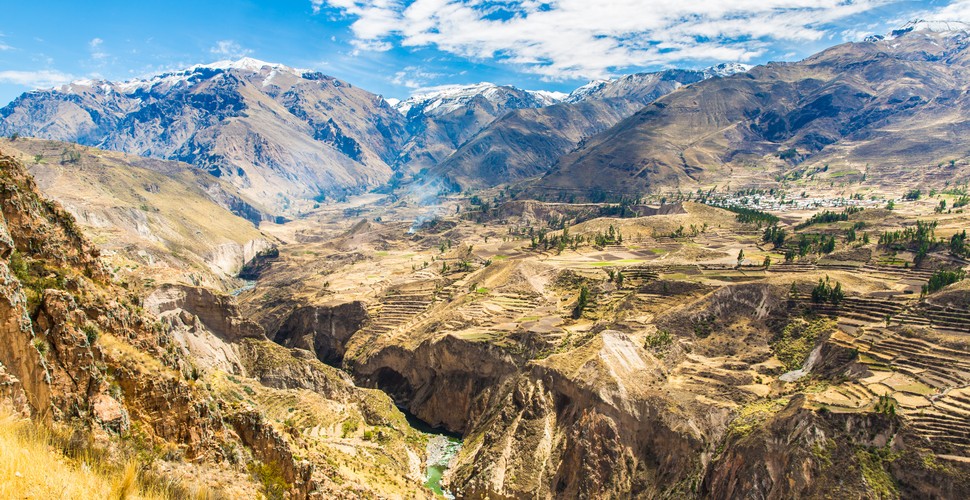 View of the Colca valley

Colca Valley has been called many things throughout the times, The Lost Valley of the Incas, The Valley of Wonders, The Valley of Fire and The Territory of the Condor. It has even been called one of the Seven Natural Wonders of the World. Colca was pretty much isolated from the outside world until the 1980's, when the Majes Hydroelectric Project, road opened the Colca to the outside world. What attracts so many visitors each year is the isolated way of life that has endured for centuries and how people still live as they did in ancient times. 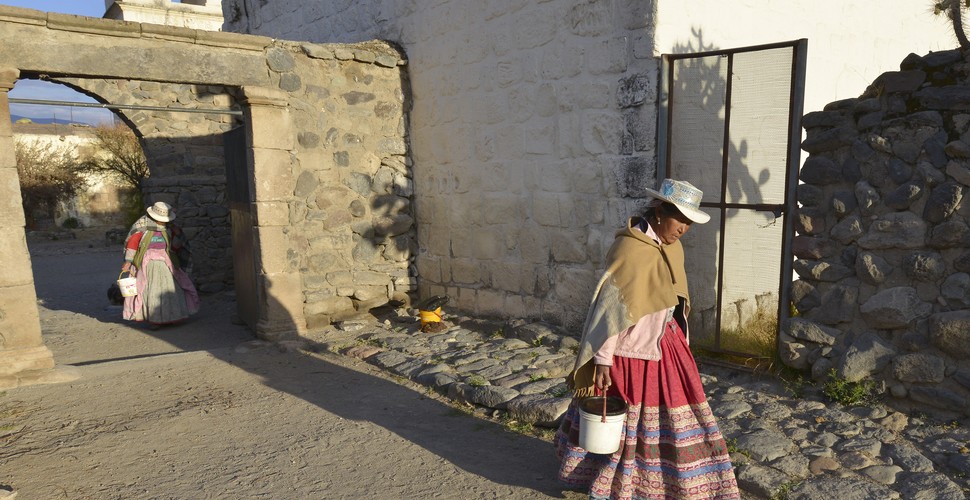 Why visit the Colca canyon?

La Calera hot springs in Chivay are another attraction to Colca and an excellent way to relax after touring the canyon. The Toro Muerto cemetery of the Wari Indigenous tribe is also worth a trip to see the resting place of these Indians, buried in a foetal position, built into the cliff face, makes for spectacular viewing.

If you plan to hike or trek in the Colca canyon, rule number one, is to acclimatize adequately. Rule number two is take adequate food and water with you. Rule number three, is to protect yourself from the sun with a hat, sunscreen, and sunglasses.  Take your own water or water purification tablets. Finally, don´t forget your camera to record this incredible experience and of course the spectacular views. 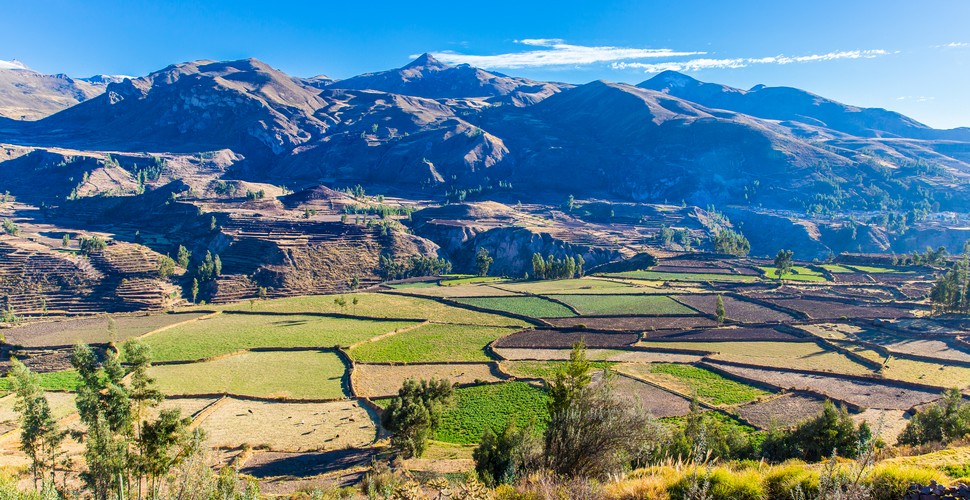 You can also head out on a rafting trip along the Rio Colca for the more adrenalin junkies amongst us. There are some impressive vistas of the canyon walls. Or you may prefer to mountain bike along the winding Colca canyon canyon roads.

Colca Canyon can be visited all year round, but it is most beautiful, and safer, during the dry season. Active volcanos close by, and seismic activity can cause landslides and make the ground unstable. Volcan Sabancayo is more active than Ampato, where the famous Ice Mummy “Juanita” was found. 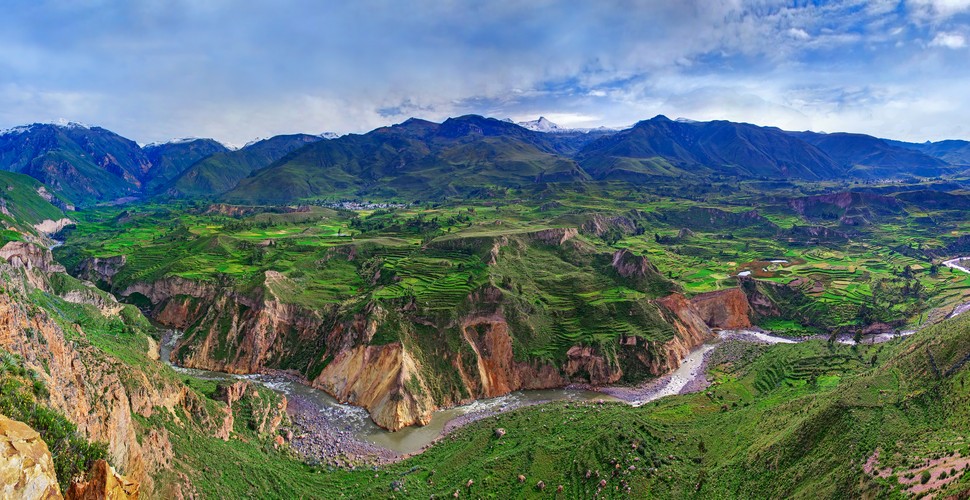 Colca river with volcanos in the background

Probably the main reason why people visit the Colca Canyon is to stop at Cruz del Condor, the where condors soar gracefully over the canyon in search for food.  They generally come out early morning to hunt or during late afternoon to spot these magnificent birds. There are no railings, and the base of the canyon, over a 1000m below the viewing area may not be for vertigo sufferers, however the scenery is astoundingly beautiful for the more daring. 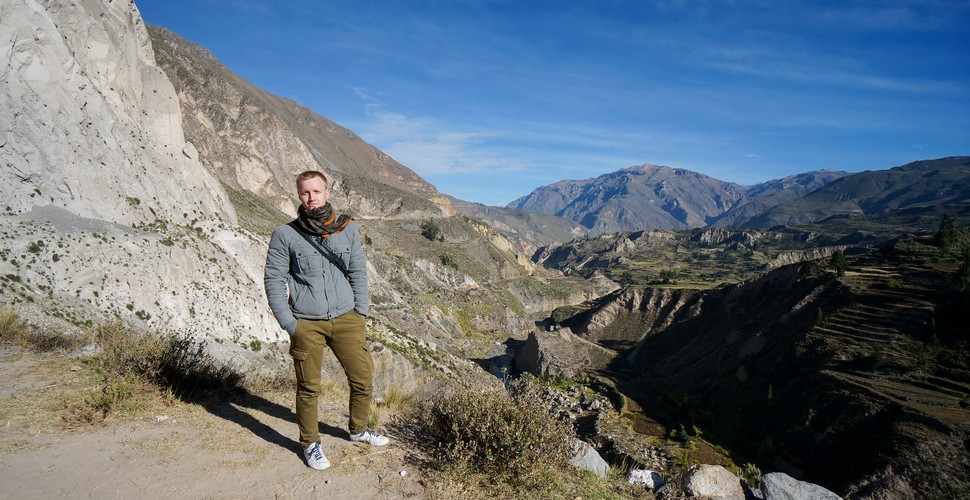 The perfect backdrop for a photo

One of the luckiest things that can happen to you while traveling through the Colca Canyon is to see a giant Andean condor. Whether it’s flying, eating or resting, a condor sighting often occurs in very elevated areas, with their nesting sites at over 3000m elevation. These majestic birds are some of the largest flying birds in the world, which has given them a mythical reputation in Andean cosmology. With a 2-metre wingspan, the sex of a condor can be determined whether they have a white collar around their neck in the case of a male. 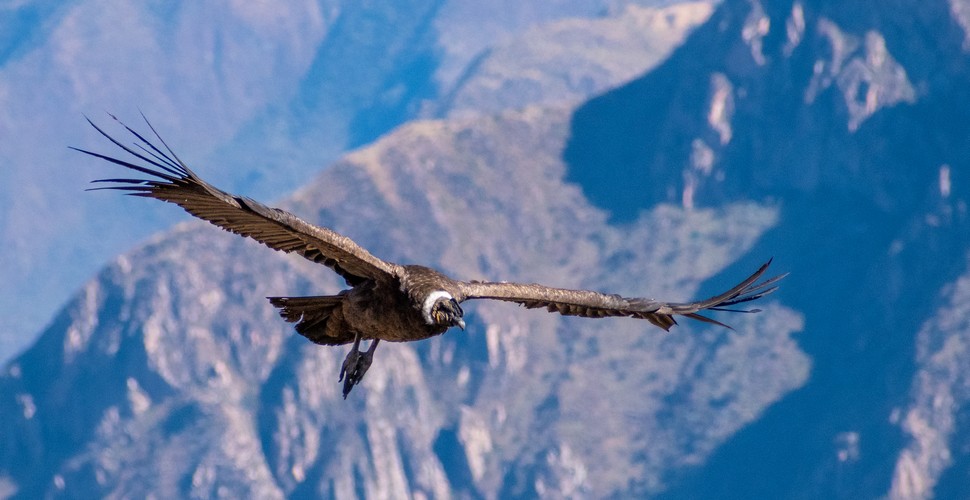 Condors are an endangered species. The National Forest Service in Lima in 2015, estimated that there were less than 2,500 condors in Peru, Deforestation, animal trafficking, food contamination by humans and the indiscriminate hunting of condors for their feathers, bones or belief that they attack livestock, are causing numbers to drop.

Although the giant Andean condor mostly resides in the highlands, their appearance on beaches and other coastal sites has been documented over recent years. As scavengers, they have been seen on deserted beaches, eating dead fish or algae washed up on the shore. Their need to find food will force them to fly great distances often over 200km per day.  Condors don’t have big pectoral muscles, meaning they mostly have to glide and take advantage the air current and their long wingspan. 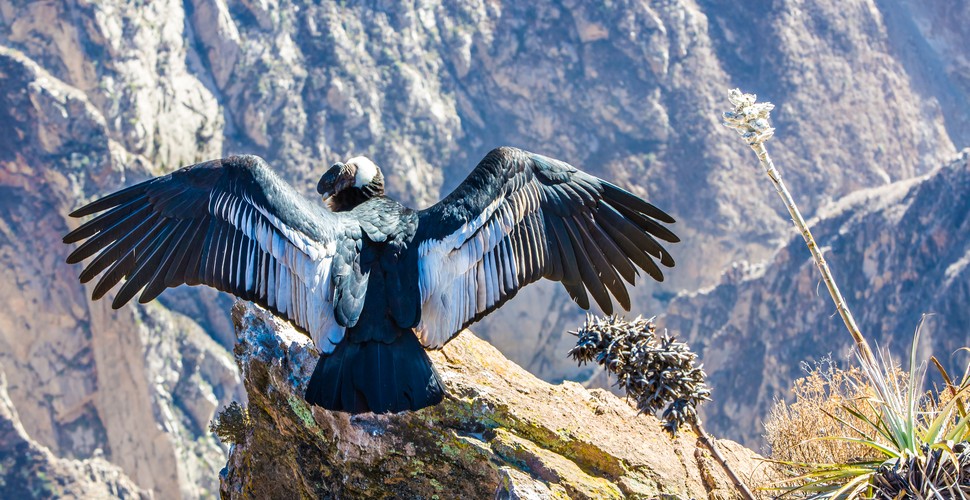 Condors are vultures, meaning they feed off dead animals and decomposed food. They’re credited for cleaning the fields and stopping the spread of diseases from sick animals. Contrary to local belief, condors are not natural hunters. Their body isn’t made for hunting. Their claws are round and short, the complete opposite of an eagle for example who catches its prey with strong, sharp claws. Condors can kill animals, if they get desperate or hungry enough, however they prefer to look for animals which are already dead. Once they locate their next rotting meal, they begin to circle the area and slowly start descending once they’ve made sure they’re alone. Condors can spend more than four days waiting for the right moment to start feeding. 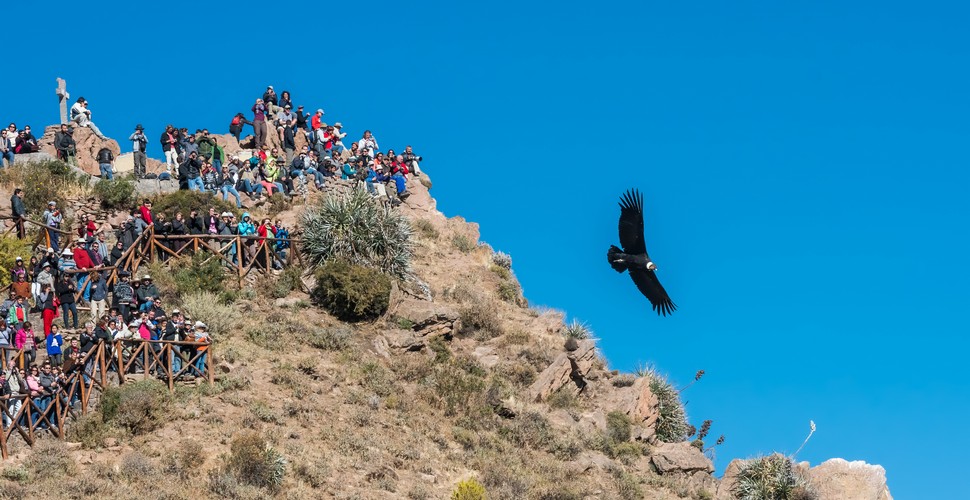 Showing off to the tourists

A normal sized condor can eat up to 6 kilos of food in one sitting and be fine to fly. But sometimes condors end up eating more than they can handle and that makes flying somewhat difficult. They usually have to rest until they’ve digested their meal, then will continue on their way.

If kept captive, condors can live up to 75 years old, but some Andean cultures believe that condors are immortal. Their mortality rate in nature is as low as their reproduction rate. Condors start breeding at age five or six, which is another reason why they are an endangered species. If their long lives are cut short, it will probably be due to human intervention. 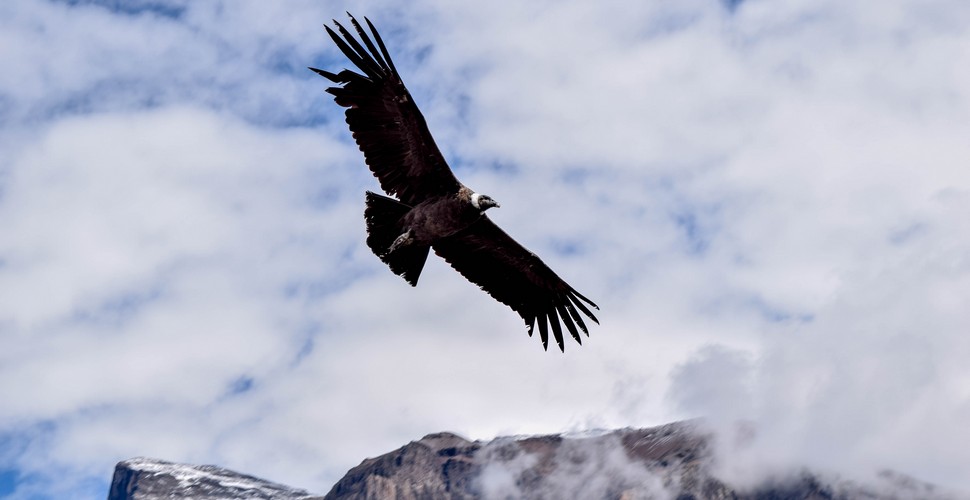 Capturing condors for traditional celebrations is still a common practice in Andean regions, despite being banned by the Ministry of Agriculture. Festivals like the Yawar Fiesta involve catching a condor, then taking it to the town’s bullring where it’s tied to a bull’s back and they fight, rodeo-style. One of the interpretations for this activity is that the bull represents Spanish culture and the condor represents Andean identity overpowering their colonizers. 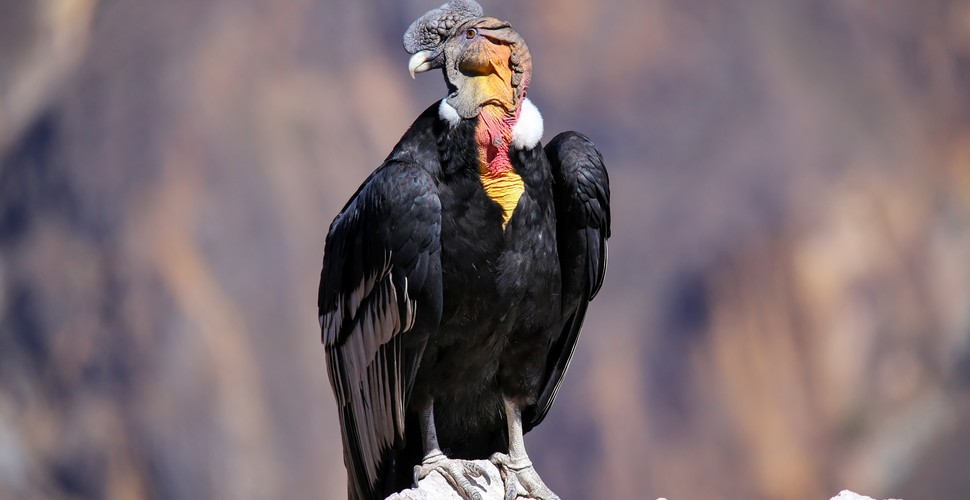 The Incas believed the condor was one of their three magical animal gods. This Inca trinity consisted of the puma, representing the earth; The snake, representing the underworld and condor who represented the heavens. Since they fly so high, the Incas thought condors were God’s messengers. The Incas believed that condors were immortal, although some Andean mythology explains that condors can end up committing suicide. It’s said that once condors feel old, without energy and useless in life, they climb to the highest peak and let themselves drop their death. 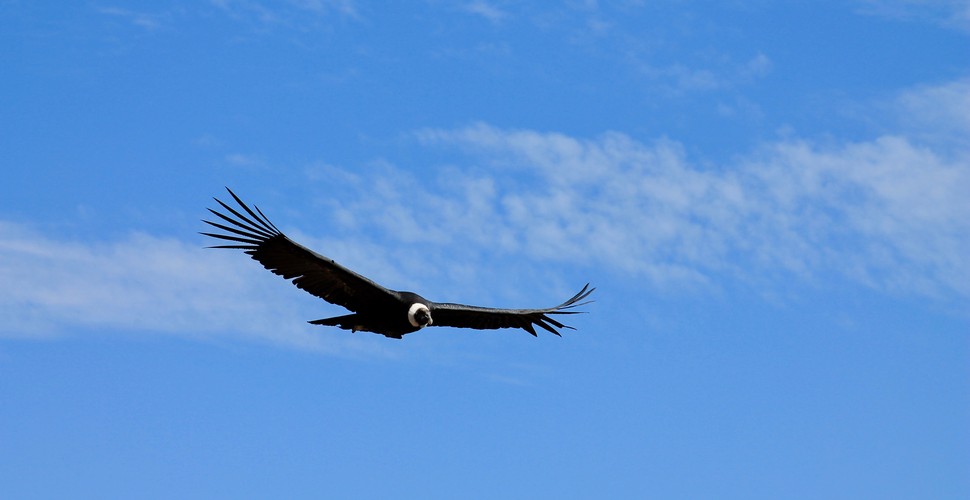 Soaring in the heavens

Condors mate for life. The female will lay her egg on a cliff edge. The Andean Condors generally lay their egg on bare rock due to lack of nest building materials and both parents take turns incubating the egg. They have one chick every other year. Their young take a lot of time and effort to raise and they can't fly until they are 6 months old. They will also be dependent on their parents for over two years. 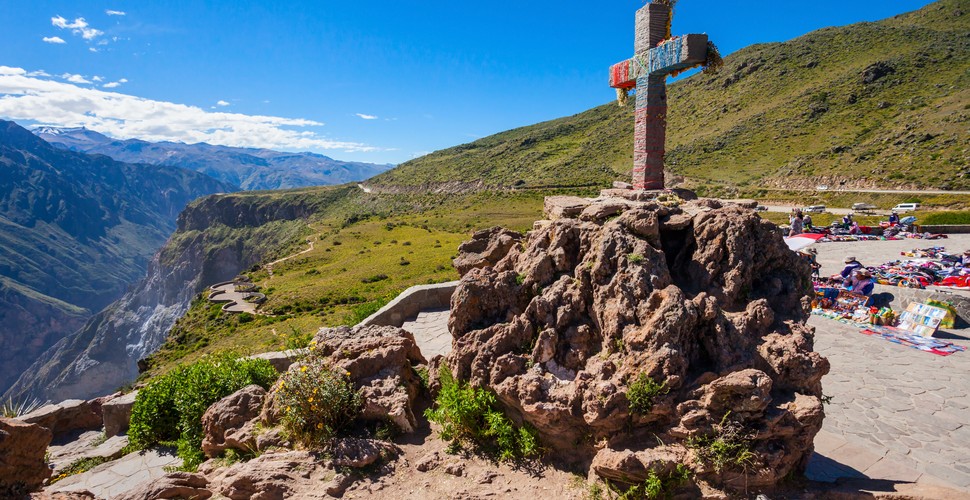 Condor Cross at The Colca canyon