What is Inti Raymi?

For more than 500 years, Inti Raymi has been the most important date on the Cusco’s events calendar. This religious celebration of the Inca Sun King, “Inti” and “Pachamama”, the Mother Earth, came about due to the Inca civilization fearing the damaging effects of the sun during winter, which led them to worship the sun to ensure a healthy harvest. The Festival of the Sun, also celebrates the Inca New Year and winter solstice, in the Southern hemisphere. 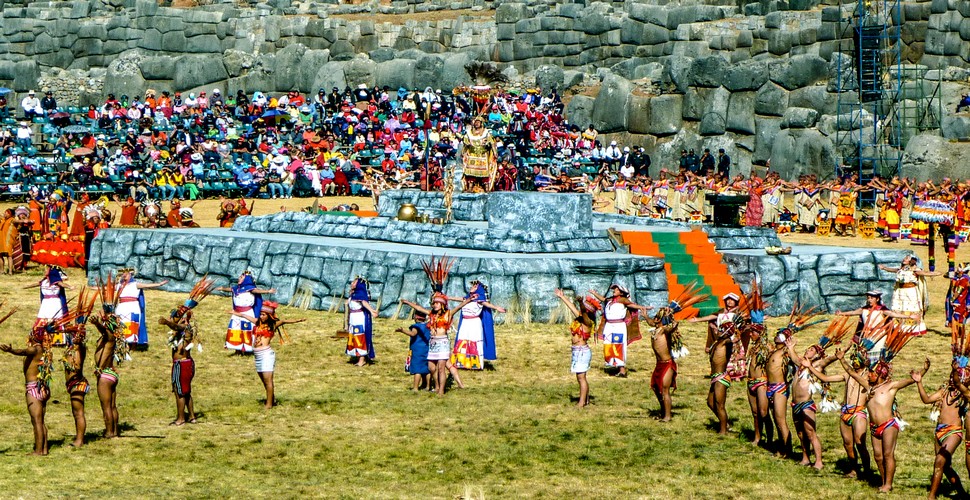 Like the ancient feast which today’s Inti Raymi festival represents, the festival honours a new cycle of life with several days of exulted dancing, drinking, and eating, with the main event on June 24. In a city that has a full cultural calendar especially in June, Inti Raymi has become one of the largest and most important celebrations in Cusco, probably because of its local significance. 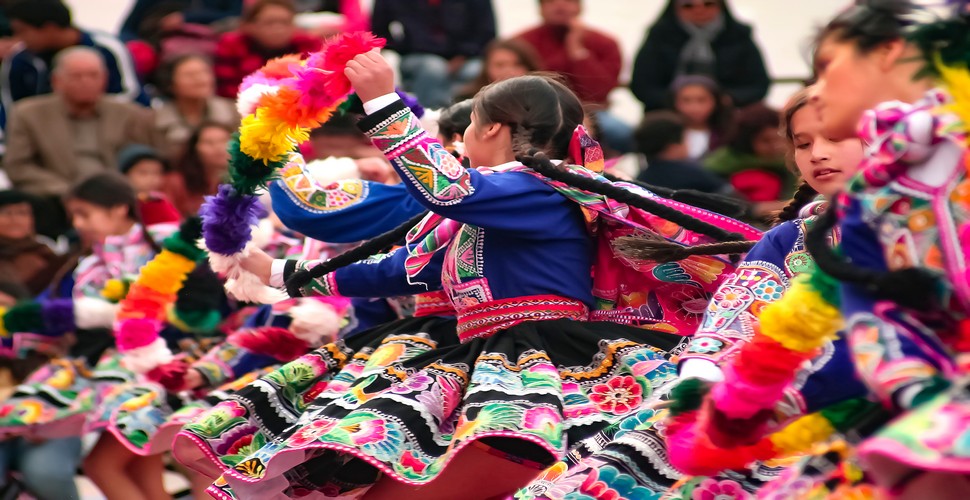 More than 500 actors, organized by the Cusco university, professional actors, or a neighbourhood affiliation, prepare and practice for months beforehand, designing elaborate and ornate costumes, refining dance sequences, and coordinating minor details or the procession, all to give full homage to the Inca past. 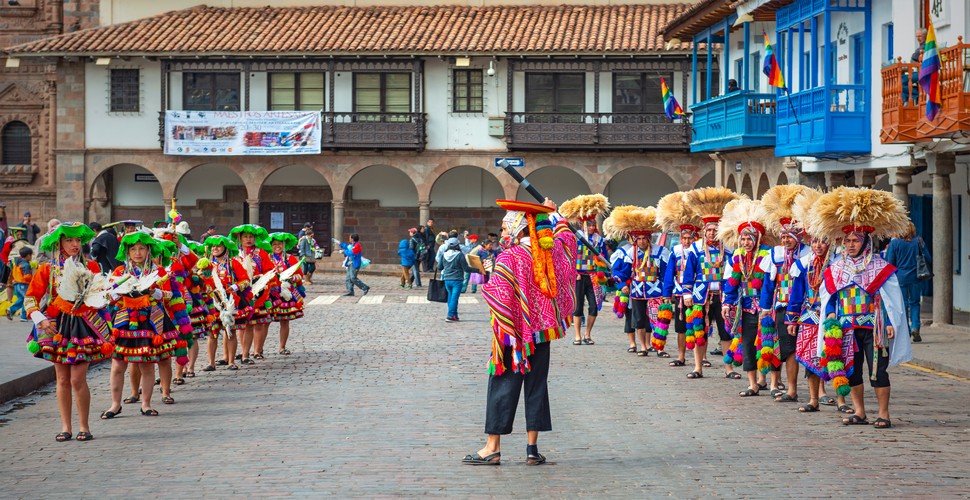 What happens during the ceremony?

On the day of Inti Raymi, the procession is staged at Koricancha, the Plaza de Armas, and Sacsayhuaman. These were the most important ceremonial sites in Inca times, and today they are among the few remaining examples of the Inca’s mastery of monumental stone architecture. 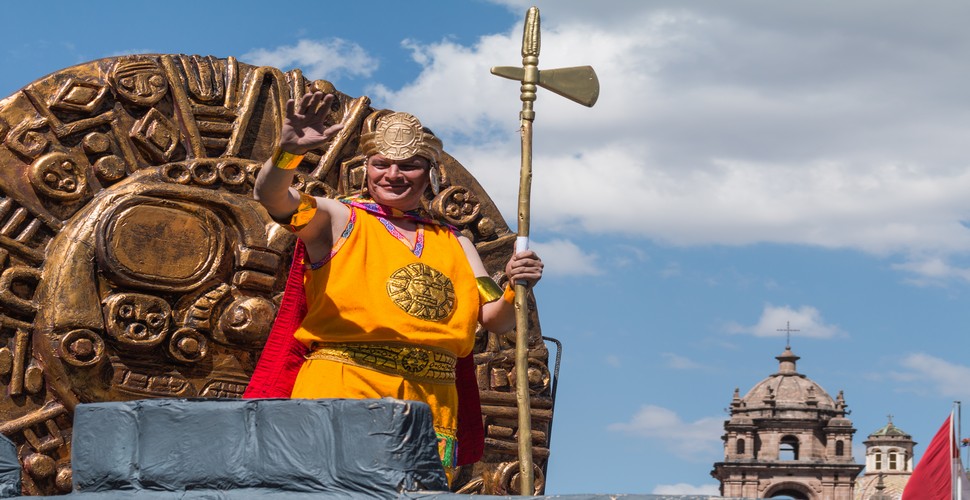 The starting point of the procession is the Koricancha, the former “Temple of the Sun,” and the current site of Santo Domingo Church. It was here that the Inca civilization worshipped Inti, the Sun God, and this grandest of palaces was decked out accordingly. Inti Raymi begins at San Domingo Church, the site of Koricancha, the Inca Temple of the Sun. The darker-hued stone wall is the building’s most visible remnant of Inca architecture. The chronicles of the conquest say that, when the Spanish first entered Cusco, The Koricancha was among the most incredible constructions that they had ever encountered in the Americas. The walls of the temple were plated in gold, and the gardens were littered with life-size reproductions of Andean flora and fauna, including golden-fleeced llamas, tiny insects, ears of corn, and the most delicate flowers, all crafted in gold and silver. Aside from 4,000 attending priests, the most notable residents of the Koricancha were the deceased Incas, mummified and wrapped in beautiful clothes and seated upon thrones of gold to rest until eternity. Of course, none of these artefacts withstood the plundering of conquering Spaniards, and all that remains are a series of Inca walls that were spared when construction began for the Spanish Santa Domingo church that now towers on top of the original site. 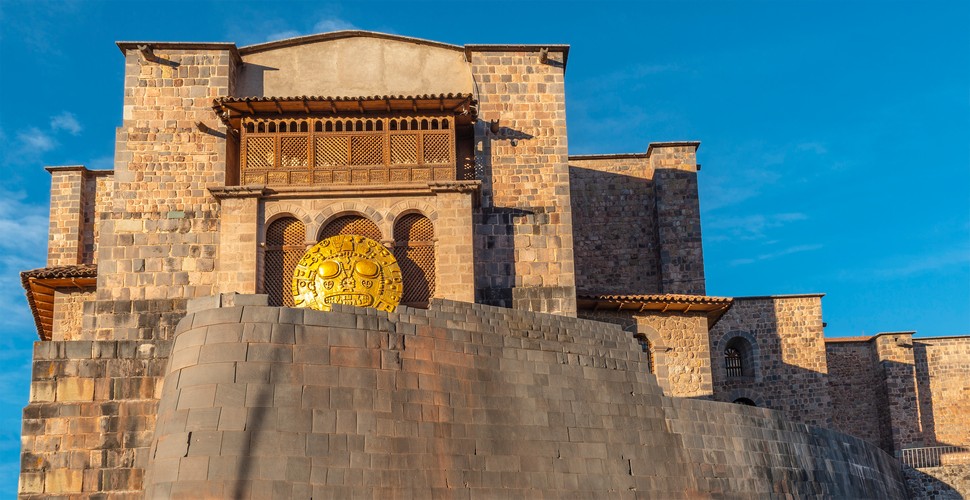 The procession continues on foot to the Plaza de Armas and then further up the hill to Sacsayhuaman, an expansive archaeological site where the remainder of the Inti Raymi rituals are performed to the delight of thousands of onlookers. The entire ceremony is conducted in the Quechua language. 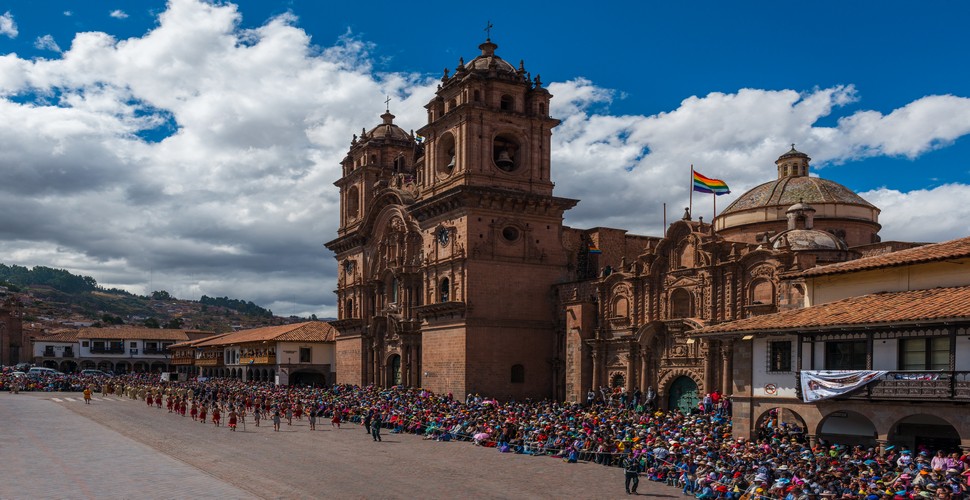 Once the procession reaches Sacsayhuaman, Sapa Inca addresses the pallbearers, one dressed as a Snake to represent the underworld, one dressed as a Puma to represent Earthly life and another dressed as a Condor representing the heavens. It’s then that a faux sacrifice of a Llama takes place and the llama heart is held up to Pachamama (Mother Earth) to ensure the fertility of the next harvest. It is important to note that no animals are harmed in this ceremony. 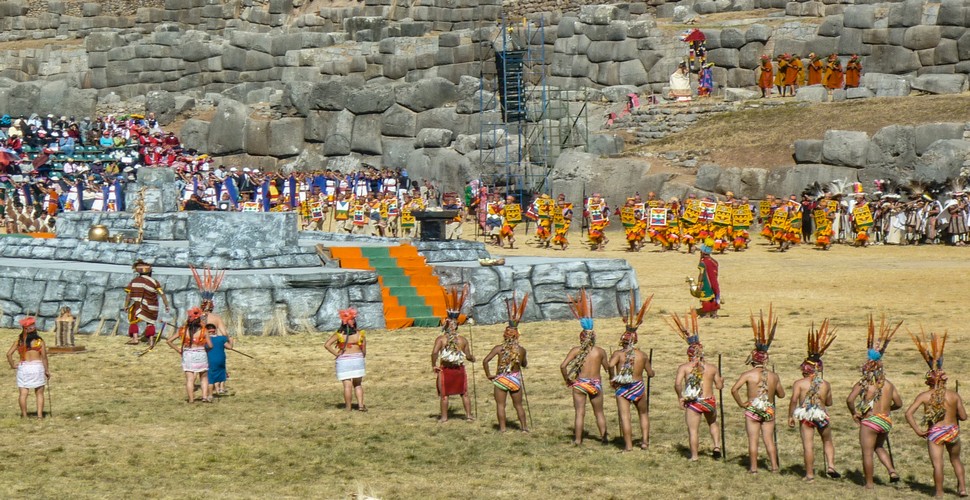 As the sun sets, a bonfire is lit and the final part of the ceremony ends with the procession returning to Cusco with the Sun King and his wife carried back upon their chariot.

Where can I watch Inti Raymi in Peru?

At the Koricancha
Although you’ll find no official seating here, there’s plenty of standing room. The festival itself takes place in the gardens just outside of the temple. You’ll find it along Cusco’s Avenida El Sol, just remember to arrive early for the best views. 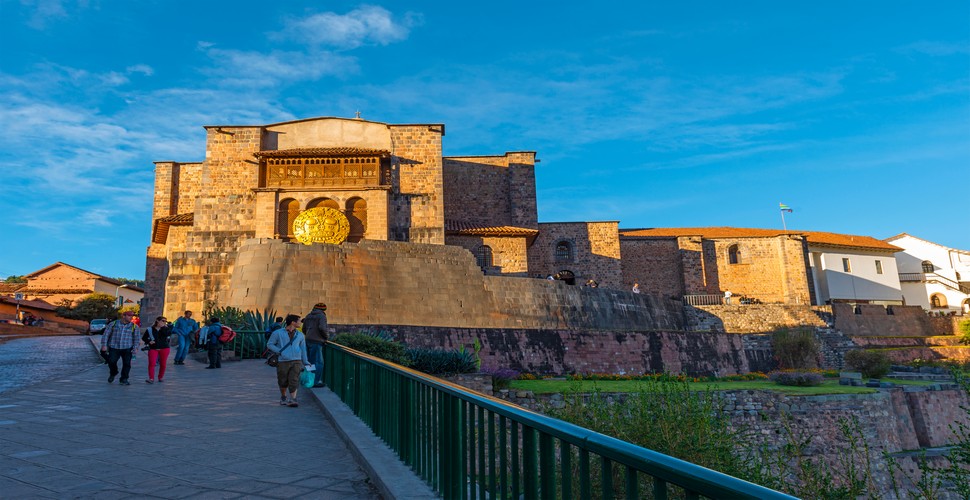 Cordoned off for the festivities, you’ll still find space around the colonial arcades of The Plaza de Armas to view the ceremony. Just be prepared to stand in crowds that are 4 or 5 people deep. We’d advise arriving to a pre-booked table at a local cafe or restaurant, enjoying a drink on the 2nd floor balcony and watching from there. 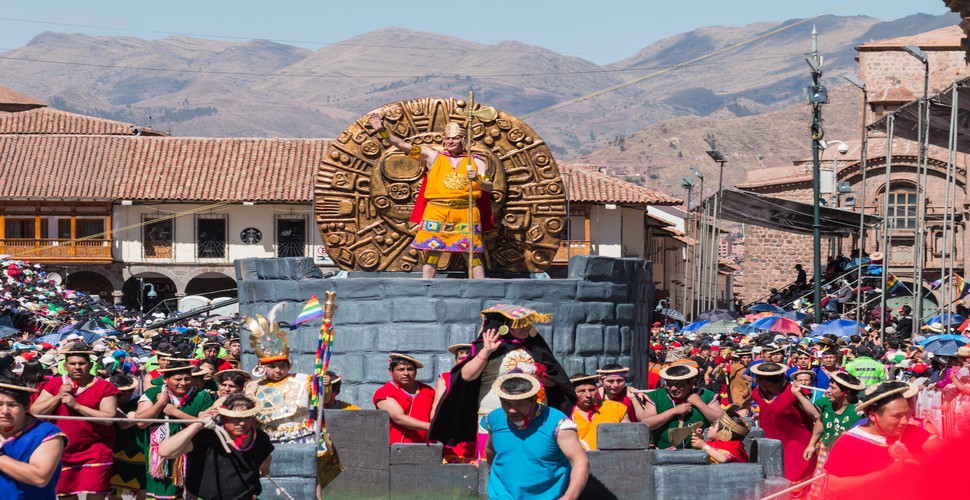 There are two options for watching the Inti Raymi ceremony at Sacsaywaman on grandstand seating which are sold on a first come first served basis. It’s always best to try and book this through a local agency well in advance. Or you can join local Peruvians at roughly 8am and watch from two of the local parks that overlook the site. Be prepared for crowds and take everything you will need for the day (food, water and sun protection). 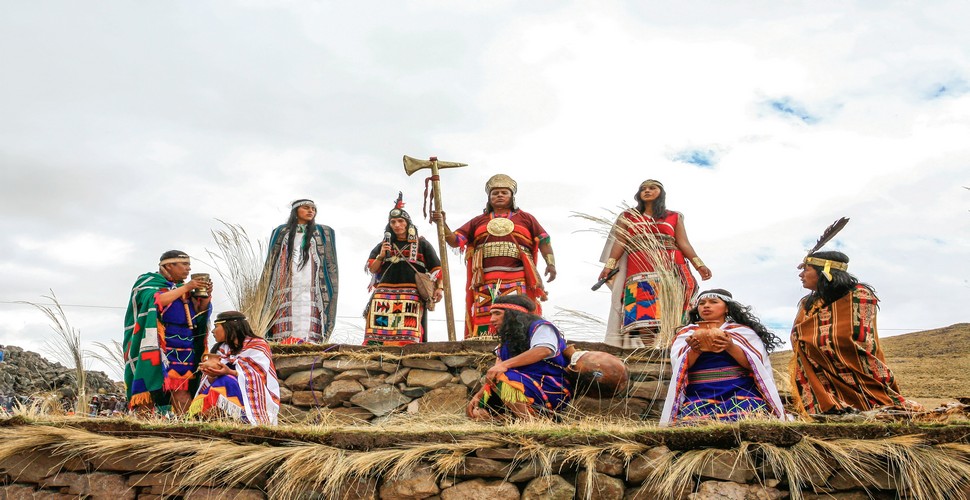 The main festival takes place at Sacsayhuaman, Cuzco on the 24th of June 24th each year.

We suggest booking well in advance to get a seat for the ceremony and your accommodation in Cusco. Your local guide to go with you to explain each part of Peru's Festival of the Sun and what it represents. Most importantly, be respectful of the ceremony itself, there are many centuries of tradition that are steeped behind these rituals. 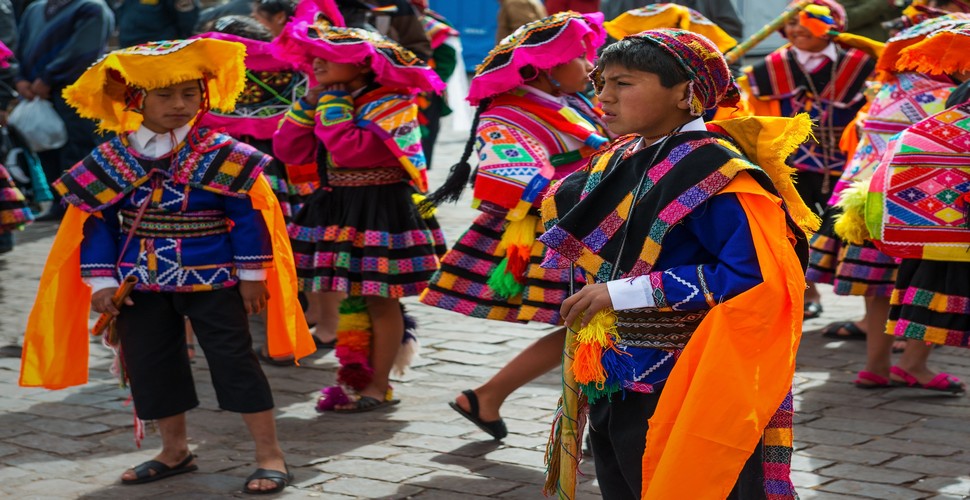 Local attractions: We’d suggesting making the most of your stay in Cusco and hitting the Inca trail to the ancient city of Machu Picchu.  Prepare well as it’s quite the trek but don’t let it put you off, the views once you reach the archaeological site are worth it. You can also see at the Inca stonework that is still evident on the cobbled streets of Cusco itself. Contact Valencia Travel for more information about the magnificent Inti Raymi festival or to book one of the limited places. 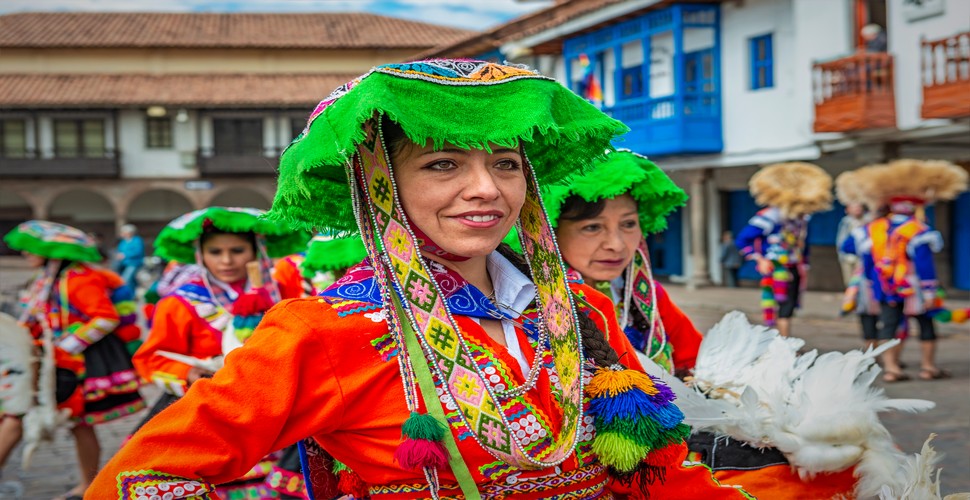